Okay, first off, don’t follow me if you think this is a crafting blog. It’s not.

But I have been following the shenanigans of Bonnie Burton and Anne Wheaton and their #VandalEyes campaign for a while now, and I was jealous of the GINORMOUS googly eyes Bonnie had at San Diego Comic Con / w00tstock. Since I have enough trouble finding regular-sized googly eyes, I decided to start making my own.

My first project is a pair of wall clocks. 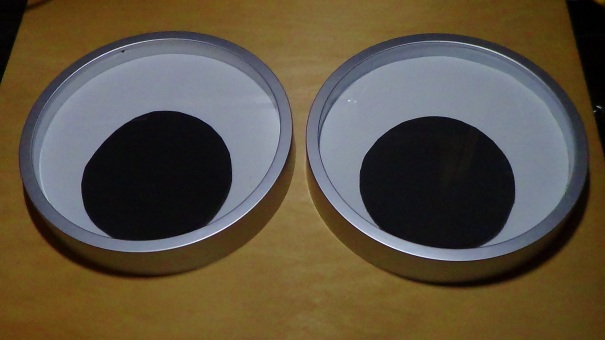 (And yes, they really do work.) Here’s how I made them:

A) Things you will need:

B) What to do with them:

There. Now you can call yourself an amateur horologist. (Again, not as dirty as it sounds.) Good luck, be crafty, and go Team VandalEyes. If you do make your own set, take a picture and post it to Twitter with the #VandalEyes hashtag or at vandaleyes.net. That would make me very happy.

Now, just how BIG can googly eyes get? I wonder…