The Problem with Prophecy (Part 10) 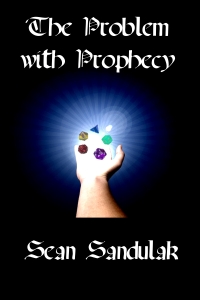 There is only one day left in the The Sword & Laser Collection Contest. Vote for your favorite before noon PST Jan 15, 2016!

They rode through the nearly empty back streets, straying only to the main roads when there was no other path. Before long they founded themselves at the base of the spire of the Temple of Light. Its walls gleamed brightly as though they were bathed in full moonslight, even though the sky was overcast and the night dark as pitch.

They tethered the horses outside at the pilgrim’s stable under the watchful eyes of the Temple Guard. These mindless automata, seven feet tall and plated in silver, were animated by divine will and watched unwaveringly over the grounds for violations of the Temple and sacrilege to the Goddess. They were known to take a thief’s hands off for even the smallest transgression. Even Rieki did not risk stealing within sight of them.

Consequently, there were fewer safer places in all the realms – as long as you played by the rules. Cravan grumbled at having to leave his axe behind, but no weapons were allowed beyond the tower’s threshold. One look at the menacing halberds in the hand of those metal giants. however, was enough to convince even him.

The interior of the Temple almost blinded them. Full of mirrors and polished metal to reflect the thousand candles that burned in the main hall, it was a startling contrast to even the well-lit exterior of the Temple. As their eyes adjusted, they saw that the room was empty except for a single caretaker. This was not unexpected as the Prayers of Last Light would have been said an hour before and the Prayers of First Light would not come until dawn. They walked the length of the hall and stood before the altar where the priestess knelt. It wasn’t until they were closer that they realized that she was praying over a closed coffin, a burning candle clasped between her slender hands.

She rose and faced them as they approached. The priestess was young with dark hair and brilliant blue eyes. “Welcome to the House of Light. How may we be of service?”

“I’ve come to see the Keeper of Records,” announced Mor.

“Of course,” she said and went back to praying.

After a minute, Mor looked at his companions and shrugged. “Excuse me,” he said to the priestess, “do you think you can get him for me?”

She stood up again and faced them. “I’m sorry. I don’t understand. You said you came to see the Keeper of Records.”

“Yes, I have important business with him,” said Mor.

“But he is with the Goddess,” said the priestess, “and can’t be disturbed.”

“Is that what they call making water around here,” asked Rieki, “because I need to use the little goddess’s room myself.”

“Well, boil me in oil,” said Cravan. “I never thought I’d see the day when I was the smart one of the bunch. He’s the one in the box, you lunkheads.”

“Your tactless companion is correct.” said the priestess. “The Keeper passed from our world this very morning. I am keeping vigil until the rites of ascension can be given in the morning. Do you still wish to pay your respects?”

“Damn,” said Mor. “I mean…yes, of course.” He took one of unlighted candles from the altar and held it forward. “May the Light of the Goddess lead him home.”

The priestess tipped her own candle forward until the flame touched Mor’s wick and ignited it. “May Her Light shine upon us all.”

Mor placed the lit candle into the holder next to a dozen similar candles of varying lengths. He motioned for his companions to do the same and waited until they were finished before he spoke again. “We are very sorry for your loss, but we desperately need to access the Temple Library. May we speak to the new Keeper.”

“I am Tia, Apprentice Keeper,” said the priestess. “At least until the rites are performed tomorrow. Can your business not wait until then?”

“I’m afraid lives may be in danger if we do not act quickly,” said Mor. Even he felt guilty lying in church, but the gist of it was true. She didn’t need to know that the lives at risk were their own.

“Very well,” said the Tia. She took her candle in one hand and reached down to ring a small bell. The tinkling sound summoned a tall, thin priest with a heavy beard. Wordlessly, he took a candle from the altar and bowed toward the priestess. After she had lit the priest’s candle from her own, she placed hers upon the altar and motioned for the trio to follow her up the winding staircase.

The Library took up four floors, the shelves arranged like spokes on a wheel around the central atrium that ran the height of the tower. Tia went through an archway and the air seemed to shimmer as she passed. “Do you have your ward stone?”

“Of course.” Mor followed closely behind her but when he reached the archway he was stopped dead in his tracks as though he had walked into a wall. He rubbed his nose and checked for blood as Cravan snorted and Rieki giggled outright. “I don’t understand,” said Mor. “It’s not working.”

“May I see it?” asked Tia, extending her arm through the barrier. Mor reached into one of his pouches and produced a small flat stone the size of a coin. He handed it to the priestess who took it into a nearby alcove. After several minutes of paging through an unnecessarily large book, she returned to stand in the archway. “That particular ward has expired.”

“Expired?” asked Rieki. “Did you forget to pay your overdue fines, Mor?”

Tia’s lips curled in disgust and contempt. “Nothing so trivial. You have been branded as criminals by Lord Pertwin. I remind you that while all are welcome at the Temple of Light, any thievery will be dealt with harshly. The Temple Guard will know if any items are unlawfully removed from the grounds. The Goddess grants them the sight to identify every transgression, no matter how small.”

“Pertwin is the real criminal for butchering the works of Yanos,” said Mor. “I don’t suppose there is any way to appeal?”

“It is a magical seal which can only be removed the Keeper of Records. I could do it after the rites are performed in the morning, but Lord Pertwin is a respected member the court and you are complete strangers. I see no reason to repeal the ban. Do you wish to confess your sins to the Goddess?”

“We don’t have that kind of time,” said Rieki.

“If you can’t get in, there’s no point staying here,” said Cravan. “Besides, temples are boring. Let’s go find a good alehouse instead. You’re buying.”

“It might be time for a tactical withdrawal,” said Mor, “while we consider our options. Once again our condolences on your loss. We can see ourselves out.”

Despite there being only one way to go, Tia insisted on showing them to the door. Mor, Cravan, and Rieki descended the stairs back to the main hall to find that they were not alone. Standing in the main aisle surrounded by a dozen guards was Lord Pertwin himself, a look of smug satisfaction on his face.

If you like this story, consider getting a copy for your self. The Problem with Prophesy is currently selling pre-orders at Inkshares until March 3rd, 2015. I’m publishing the first few chapters here as a teaser. If the book reaches 750 pre-orders before March 3, 2016, it will receive professional editing, design, distribution, and marketing. For more information visit Inkshares.com.