Be a Good Sport (or I’m a Bad Canadian) 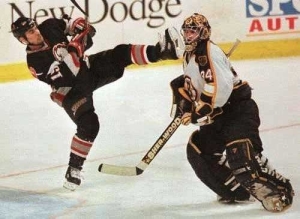 So, I don’t like hockey. Shhh… don’t tell anyone, or they may kick me out of the country. Or burn me alive. It’s fifty-fifty at this point. People get very passionate about [insert local sports franchise here]. They like to feel like they’re a part of the team. Especially if their part involves a lot of sitting around and drinking. Go team.

I was never good at sports. I am spastically uncoordinated and lazy, so running around on a field seemed like a lot of work with very little payoff. This is sports as I see it:

“How do you play this game?”

“You take this ball and try to get it over that line.”

“And then you try to do it again.”

“If you want it over there so badly, why don’t you just leave it there after the first time?”

“That’s not how this works.”

“Okay, you’re the boss. What do I get for taking the ball over the line?”

“We give you points.”

“You mean like Air Miles? Can I cash them in for a free flight?”

“How about a thermos then?”

“No. The team with the most points when the time runs out wins the game.”

“Seems simple enough. I just take this ball over there, then bring it back here, and then we go get drunk. Got it. Feels kind of pointless to me, but hey, it’s your game. Where’s the other team’s ball?”

“There’s only the one ball. The other team is here to try to stop you from scoring.”

“Whoa, whoa, whoa. Back up a minute. I already don’t want to do this, and now a bunch of people are actively going to try to stop me. You’ve got a lot to learn about sales. If you want me I’ll be over there smoking with the goth kids.”

Basically, I have trouble getting behind whiny millionaires working for weasely billionaires who do nothing but suck money out of the public coffers to play children’s games. That, and they always get all the good-looking girls. I do appreciate the dedication and discipline that goes into being a professional athlete, but I could also say that about the guy who rolled the world’s largest ball of twine. Credit where it’s due, sir.

The worst part about hating sports is that you’re turned into a social pariah if you don’t follow every detail of the previous night’s display of testosterone-laden freaks. And that’s just the women. I’m only joking. Everyone knows that there’s no such thing as women’s sports. Except for beach volleyball. I’m just going by what I see on television, of course.

Also, there’s the extortionary prices, belligerent douchebag fans, and the obligatory riots. Like  Joshua said in Wargames – “the only winning move is not to play.” How about a nice game of chess. Or tennis. Nobody ever flipped a police car at Wimbledon.