Home › Blog › Social Media and the Nature of Friendship (or Stop Poking Me, I Hardly Know You)

Social Media and the Nature of Friendship (or Stop Poking Me, I Hardly Know You)

So far there seem to be two competing models for the online experience. On the one hand, there are the mega-entities like Facebook that are content to give to give you a platform to do anything you like (as long as it conforms to Disney standards and practices). All they ask in return is to siphon off a little bit of your life force in the form of selling all your personal information to the highest bidder. All in the name of trying to sell you more useless crap you probably don’t need. (Why Google ads thinks I would want to buy My Little Pony merch is beyond me.)

Alternatively, we can jump into the communal wells, like 4chan and reddit, where everyone throws in their two cents but wishes rarely come true. While these loosely knit communities can sometimes come to a consensus, it is usually of the pitchfork and torches variety. That is not to say that there are not amazingly talented people everywhere you look on the internet, but finding them in all the noise is like finding one particular fish in the Pacific. And speaking of marine life in bodies of water, I don’t even know where to begin when it comes to online dating sites. (In all fairness, I am clueless when it comes to dating in any form.)

So, as we plunge ever deeper into this digital quagmire, are the only choices Matrix or Unimatrix? 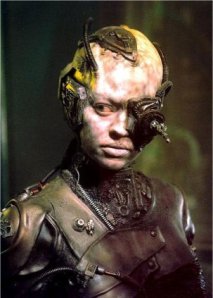 We mistake our online interactions as intimacy, when they are, in fact, much closer to the fancrush you feel for your favourite celebrity. True networking is a two-way street. What is important is connecting with other people. You have to listen as well as broadcast. Ultimately, which platform you use doesn’t matter. It is a personal choice, like wearing a hat. You have to find the one that fits best — tuque, beret, stetson or bowler. (Mine is a propeller beanie.)

We, for the first time in history, have a truly global reach and access to unlimited intellectual resources. But we are still failing when it comes to building communities. Friendship is a continuum, not a light switch. Relationships take time and effort to develop; ultimately, you get out of them what you put in. (Unlike slot machines.)

Also, Jeri Ryan is one of the coolest people on Twitter. You should send her pictures of your cat.
@JeriLRyan

2 comments on “Social Media and the Nature of Friendship (or Stop Poking Me, I Hardly Know You)”