Home › Blog › Expressing Yourself in the Age of Consumerism

Expressing Yourself in the Age of Consumerism

With a computer in nearly every home in the industrialized world, instant access to a worldwide repository of visual images, and freely available software to manipulate those pictures, it was only a matter of time before people started making dumb jokes and pasting heads on other people’s bodies. The culture that has grown up with the Internet spends an ever-increasing amount of time online, so it’s no wonder that their creativity and humor would also manifest themselves in the digital realm. In today’s world, children usually spend their days sharing on social media, not learning to make quilts and needlepoint.

But is bad photoshop art — or just a waste of time? From Wikipedia:

Folk art encompasses art produced from an indigenous culture or by peasants or other laboring tradespeople. In contrast to fine art, folk art is primarily utilitarian and decorative rather than purely aesthetic.

Despite the air of pretense in that definition, it basically states that folk art is how a people decorate the objects found in their everyday lives. But we’ve moved from a culture that makes most of our belongings from scratch to one that buys in bulk from a factory halfway around the globe. This makes it harder to put your individual stamp on your belongings.

At the same time, we’ve created a whole new reality made of electrons and light. It only makes sense that as more of our lives and identity move into the digital world, we would want to decorate and personalize that space as well. It gives us back some of the control we’ve lost for the benefits of low cost and convenience.

Folk Art is characterized by a naive style, in which traditional rules of proportion and perspective are not employed.

Well, that’s certainly true. At least some of the time. The truth is that it is not a difficult skill to learn. With a little practice you can make something that looks photo-realistic. Here is an inside joke for fans of The Guild. 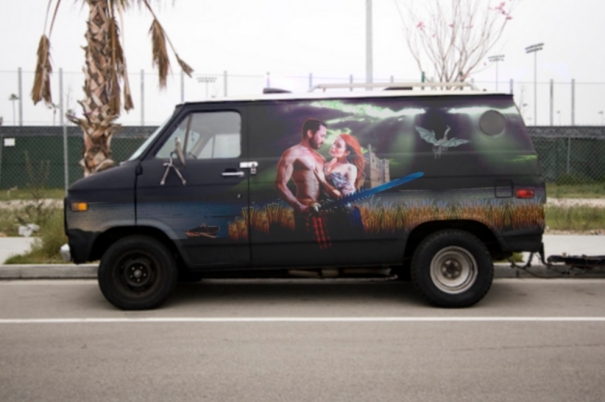 A little time spent on the computer one evening, and I made Felicia Day type in all caps.

This one is NOT photoshopped.

Sorry Felicia, not yet. Maybe when I win the lottery. For those of you who haven’t seen The Guild, or if you just forgot, here’s the scene from Season Four that inspired it. (12:28)

Speaking of The Guild, Wil Wheaton recently posted a picture on Twitter of himself standing in front of a green screen and challenged his followers to photoshop him into whatever picture they wanted. The flood of submissions prompted him to start a new tumblr. Here is one that I sent him, which got me my third official retWheaton™:

But is this just the easily amused killing time until the next episode of Doctor Who, or do these shenanigans have a deeper cultural meaning?

That, I think, is the key. The reason we share cat pictures on Facebook is not because we need to appease our feline overlords so they won’t eat us in our sleep, it’s to connect to others who share the same sensibilities and values that we do. In a world where technology was supposed to bring us all together, we can still feel isolated and alone. If a photoshopped picture of penguin on roller skates can help you find your tribe, then who am I to judge?

Also, I may not know art, but I know how to fake it.